Fidyah (الفدية‎) is an obligatory donation that must be made when a fast is missed through necessity (such as illness) that the person is unable to make up after Ramadhan. Your Fidyah donation must provide one (impoverished) person with two meals (one full day of food) for each fast that you’ve missed.

So for a single missed fast the amount payable is £3. If fasting is not possible for the whole month of Ramadhan, the total is £90 (£3 x 30 days).

Kaffarah (كفارة‎) is a payment that needs to be made when a person deliberately breaks a fast during the month of Ramadhan without a valid reason, when the person cannot fast for 60 continuous days to make up for that one broken fast.

The requirement for Kaffarah is to provide one person with two meals a day, for two months (60 days) for each broken fast. It costs £3 per day, so the total due is £180 per broken fast.

Please make your Fidyah or Kaffarah payment today to provide food to those in need.

Kaffarah
This is major compensation and like Fidyah it is also Sadaqah Wajibah. It applies in various situations such as if a person breaks a fast intentionally, breaks an oath, or causes the death of someone, Kaffarah would then be binding as the form of redemption. There are five actions for which kaffarah will be necessary, however, they fall under two types.

Greater Kaffarah
For redemption of this a person may free a slave (if feasible) or fast for sixty consecutive days (if a person breaks a fast intentionally they would need to fast for sixty consecutive days, unless they can’t fast due to poor health or old age, there are no exceptions to this). Failing that one may feed sixty poor people for a day (i.e. give them the amount equivalent to fidya/sadaqatul fitr or give them two meals for the day). This Kaffarah applies to:

* Intentionally breaking Sawm (fast)
* Breaking Zihar (to consider one’s wife as Haram for oneself by comparing her to a Mahram – anyone too closely related to be marriageable).
* Being the direct cause of someone’s death (this is coupled with the set punishments).

Note: In the instance of not being able to feed sixty people in a single day then he may feed one person for sixty days, but in this case if he were to try to quicken payment of this by giving all the money in one day to one person, kaffarah would not be fulfilled, and his offering would only be equal to one days feeding.

Lesser Kaffarah
For redemption of this a person may free a slave (which is no longer applicable) or feed ten poor people for two meals in one day, or give each one of them clothing. Failing this, he may fast for three consecutive days (The order is also different from the greater Kaffarah). This Kaffarah applies to: 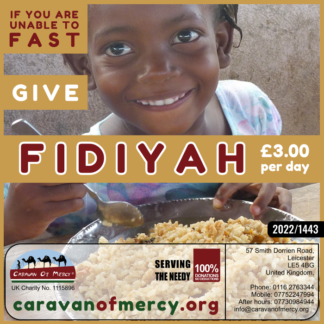 You're viewing: Fidyah and Kaffarah
Rated 5.00 out of 5
Add Donation